This article is a stub. You can help Encyclopedia Europa by expanding it.
Improving 5 stub articles will earn you a "Crimson Heart" medal.

Unlike in the original games of the Valkyria Chronicles franchise, you will not be able to control your characters actively in battles. In Valkyria Duel, all characters come in the form of cards. Collecting and training them, as well as choosing the right ones to fight in battle is the central part of this game, so getting used to handling these cards is rather helpful.

Besides managing your cards and battling it out on the battlefield, the other important part of Valkyria Duel is the management of your base. You should not neglect this part as it will really help your troops in battle: Training facilities, item shops, coalition halls and other buildings can be built. 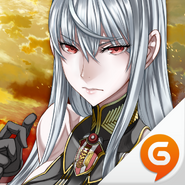 Icon for Mobile phones.
Add a photo to this gallery

Retrieved from "https://valkyria.fandom.com/wiki/Valkyria_Chronicles_Duel?oldid=59591"
Community content is available under CC-BY-SA unless otherwise noted.