Valkyria Chronicles 3: The Wound Taken for Someone's Sake (戦場のヴァルキュリア３ 誰がための銃瘡 - Senjou no Valkyria 3: Ta Ga Tame no Juusou) is a 2-episode original video animation series based on Valkyria Chronicles 3. The individual episodes were released during the summer of 2011 on DVD, Blu-ray, and via the PlayStation Network.

Produced by Aniplex's A-1 Pictures, this originally aired between April 13, 2011, to June 29, 2011. The storyline was adapted from the PSP game, Valkyria Chronicles 3: Unrecorded Chronicles. It's opening theme was "灯 - TOMOSHIBI" by Faylan and it's ending theme was "Someday the Flowers of Light Will Bloom" (いつか咲く光の花) by Kuribayashi Minami (栗林 みな実).

Following the game storyline of Valkyria Chronicles 3, the story takes place around Chapter 13 and 14, where the Nameless were declared a rebel squadron and with Gusurg defecting to the Calamity Raven. Kurt and Squad 422 struggle against the Imperial Army while simultaneously fending off the Gallian Army. Low on ammo and stamina, the 422nd manages to shake off pursuit by Gallian regulars using intimidation and non-lethal attacks. Making their escape, the Nameless encounter a lone girl wandering through a forest. They learn from her that the central-Gallian town of Dillsburg has been occupied by the Imperials. Despite their situation, Kurt orders the 422nd into action in order to liberate Dillsburg. Slipping into the town at night, they mount a sneak attack while using the Nameless Tank as a distraction. After a brief respite provided by the citizens of Dillsburg, the Nameless move on to locate a hidden stash of weaponry and supplies provided by Ramsey Crowe. Soon after, they are surprised to find an injured Isara, sent to find help for the Gallian Militia forces.

Kurt and the others learn from Isara that an assault against an Imperial-controlled base is going very poorly because of the massive mobile artillery being employed by its commander. Supporting the base's defense is Calamity Raven, with Dahau entrusting operations to Gusurg in the event of a surprise attack, one he's confident that Kurt will make. Rather than moving to the distressed Militia's position, Kurt opts to take the Nameless up and around a narrow mountain path, its exit giving them a flanking position against the Imperial base. However, Gusurg has read into Kurt's plan and has prepared a heavily-armed reception for him. Some Nameless members are injured in the firefight, and Kurt has no choice but to have Riela Marcellis use her Valkyria powers to break the enemy line with Dahau ordering Gusurg's retreat. Communicating via light signals, the Nameless and Squad 7 mount a combined attack on the base, with the latter using the immobilized Edelweiss as improvised artillery. With Calamity Raven having slipped away, the base's remaining defenders fiercely defend their weaponry, but ultimately fall to the Nameless' efforts. With the remaining Militia soldiers closing in on the base, the Nameless also make their exit.

The opening theme song describes the war from the perspectives of a soldier in Squad 422.

What is it that you see, drenched in this melody?

Assaulted by the pain of my sins, I continue forward.

Not for Justice, and not for Destiny, but for Tomorrow.

We are bonded, under this crimson sky.

Does Hope even exist in the world anymore?

As our futures are once again stolen from us..

I refuse to give in, even as the fierce winds fight to keep me down.

I must find the truth at the end of this despair.

I will not let go, these hands that have returned my grip. 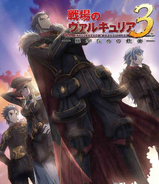