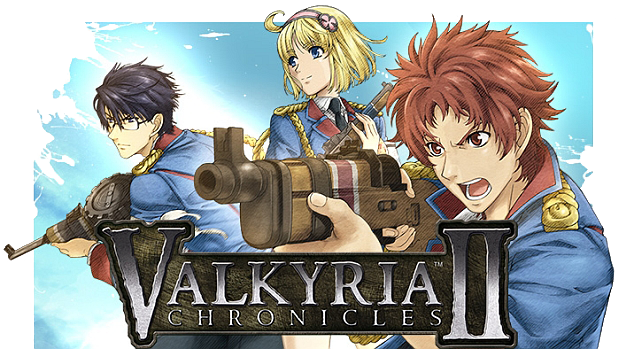 Set two years after the events of Valkyria Chronicles, the story revolves around a civil war within the small Europan nation of Gallia. A rebel group made up of dissatisfied aristocrats and like-minded soldiers and citizens calling themselves the Gallian Revolutionary Army rises up in arms in order to wage an ethnic cleansing campaign against Gallians of Darcsen descent. However, with the intense fight against the Empire having left Gallia's regular army in an exhausted state, there is initially little to stop the insurrection from gaining momentum. Laws preventing the formation of a national militia to fight fellow Gallians force the government to deploy military academy cadets to the front lines in order to combat and defeat the GRA forces.

Among the students sent out on the field is 17-year-old Avan Hardins, a young man who enrolled in Lanseal Military Academy after the death of his older brother, Leon.

Many gameplay concepts in Valkyria Chronicles 2 are carried over from the original PS3 game.[1]

The BLiTZ System is used during combat scenarios, splitting the action between an overhead Command Mode and third-person Action Mode. By selecting allied units during Command Mode, using Command Points in the process, said units can move and perform actions until their Action Points run out. When the player has exhausted their available Command Points, or volunteers to pass control without using all of them, the Player Phase ends and the Enemy Phase begins. This progresses back and forth until the battle's victory conditions are achieved or the player is defeated.

In addition, Valkyria Chronicles 2 utilizes a system of multiple area maps connected by enemy encampments. When an enemy camp is captured by the player's forces, subsequent areas are made available, using the camp as a way-point to call in reinforcements and proceed.

Similar to the original game, the characters available for use by the player each occupy a specific class. Scouts, Shocktroopers, and Lancers from Valkyria Chronicles appear again in the game, along with a modified Engineer class and a new Armored Tech. This game also introduces a new Class Change System (Japanese: クラスチェンジ). When certain requirements are fulfilled, Classes can change into a more powerful class, for example:

The two new infantry types, Engineer and Armored Tech, now divide the previous role of Engineer between themselves.

The themes being used for the game are school-life and war, as the students try to juggle their responsibilities as military academy students and as soldiers.

In a blog post on the official website, executive producer Shuntaro Tanaka has revealed that the game will keep the BLiTZ system with Wireless ad hoc network|wireless ad-hoc to be implemented. In addition, Tanaka said that the game's development for the PSP was done "to allow a broader spectrum of users to discover and enjoy what makes Valkyria special." with the possibility of the game being seen in consoles in the near future.

The staff in the development of the game were pulled from the Valkyria Chronicles staff, mainly chief producer Shuntaro Tanaka, character designer Raita Honjo and composer Hitoshi Sakimoto with Take Ozawa being posted as the game's director with previous work done on Valkyria Chronicles as its main planner. Shinji Motoyama is the game's producer, having done production work with the Sega-made Bleach games, as well as Nightshade and Blood Will Tell.

Sega revealed at the that the popular J-Pop duo Chemistry will perform the game's opening theme, titled "Our Story".

An extensive amount of special material was produced by the Valkyria Chronicles 2 staff as bonus items for those players who pre-order the game. First is a reel of bonus footage titled "Valkyria Chronicles 1936: Gallian Front Memoirs." Narrated by Cordelia gi Randgriz, the video summarizes the events of the first game, as well as happenings in the time gap between the two. Similarly, "Gallian Journal 1936" presents background information in the form of a news magazine, with such articles as an interview with the game's antagonist. A limited-edition game soundtrack will also be included. Those who pre-order will also have information with which to unlock Selvaria Bles as a playable character within the game.

Further hidden characters were also made available including Welkin and Alicia, the protagonists from the first game, Ramal Valt from the anime, and Mintz and Julius Klotz from the Valkyria Chronicles: Wish Your Smile manga. However, Welkin, Alicia, and Ramal are available as a DVD bonus from Volume 6's release in Japan while Mintz and Julius are available after using a special password. It was further announced that Isara, Maximillian, and Faldio are hidden characters, although all three had died during the events of the previous game.

A playable demo of the game was made available on the Japanese PlayStation Store on November 2, 2009, with an online download of the same demo following on the 5th.