Squad 422, also known as "The Nameless" (ネームレス, "The Nameless"?), is a unit of the Gallian Army and the protagonists of Valkyria Chronicles 3. It is a penal military unit composed of deserters, criminals and military offenders whose real names are erased from the records and referred to instead by numbers (hence their nickname). Some, on the other hand, were recruited into the Squad after being guaranteed a generous compensation. Despite being used by the Gallian military to take on the dirty work and most dangerous missions that neither the Regular Army nor Militia will do, the 422nd is nevertheless up to the task, exemplified by their motto, "Altaha Abilia" ("Always Ready" in Latin).

There is no certain gameplay following this cabin, other than it only holds residence for the squad captain, which the current resident is 2nd Lieutenant Kurt Irving himself. While off duty, Kurt would utilize his cabin time to strategize for future missions, self-meditate through new problems and experiment with new seasonings for cooking.

In the storyline, the briefing camp is where an operation brief of the next story mission or event is being commenced. It serves as the exit stage in the gameplay. After finishing browsing around the base camps, selecting the briefing camp takes you back to the map for the next mission. The briefing camp is the large armored trailer, located at southeast part of the headquarters menu.

It is located on the south-eastern side of the HQ camp. This is where you can modify your squad using the EXP points earned from each mission. leveling up, assign leaders, modify equipment and potentials, and reassign units to another class. Training a class to a certain level will yield new orders.

Located on north-eastern part of the HQ map, Carisa will sell new weapons and tank parts to the squad as her lively business. You can spend the

earned per mission to develop and upgrade new weapons, accessories, and tank parts. Weapons, armors, and tank parts can be developed and upgraded here. The tank can also be repaired here if destroyed in the previous mission. There are options to change equipment or modify vehicle configuration as well.

The squad tents are the cabin rooms for the Squad 422 members, located north of the HQ camp. You can view your progress throughout the game namely character profiles, view previous tutorials, medal collection, newspapers and renaming your squad tank.

Located at the north part of the HQ camp, this menu customizes the squad tank for the correct vehicle-type and parts for the next mission. Plus, if your tank is destroyed in a mission, this is the place to fix it (if you have enough money).

The members of Squad 422 when Kurt first joined

Imca with some other Nameless members 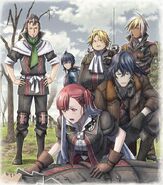 The previous Squad Commander of 422 died in Riela's arms