Schakal is a highly mobile tank that is derived from the Heavy Imperial Tank. There were about 200 Schakals operated on the Federation front during the Second Europan War but only a few were sent to the Gallian front. Lydia Agthe commanded one of the Schakals in Gallia whenever she was not in Echidna.

Lydia's tank as seen in the VCIII OVA opening. 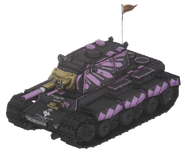 The Schakal being transported on a truck.

The Schakal with Gusurg at its command.
Add a photo to this gallery
Retrieved from "https://valkyria.fandom.com/wiki/Schakal?oldid=76200"
Community content is available under CC-BY-SA unless otherwise noted.