This article is about the city. For other uses, see Randgriz (disambiguation).

Randgriz is the capital city of Gallia, built on the southern shore of Lake Graz, and home to House Randgriz who live in the Castle Randgriz.

The capital of Gallia since its days as a monarchy, this ancient city has the longest history of any in Europa.

The city takes its name from the ancient war hero who founded it and began rule over the surrounding area, the ancestor of today's House Randgriz. Surrounded by castle walls stretching 1km in diameter, the entire city stands as a citadel and contains the seat of Gallia's politics, economy and culture. 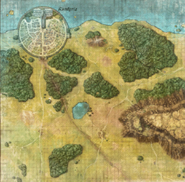 Randgriz Outskirts (after Marmota attack)
Add a photo to this gallery

Retrieved from "https://valkyria.fandom.com/wiki/Randgriz_(city)?oldid=78544"
Community content is available under CC-BY-SA unless otherwise noted.