Her love for tinkering with machines saw her enroll in a technical university. There, she began work on developing new weapons. Often careless, the machines she works on have a tendency to break down easily. She set out to create a firearm that required no maintenance, but got bored.

She took a cushy job at a major weapons firm, but one too many malfunctions got her fired. Since then, she's been back to work on maintenance-free weaponry.

Ramsey has enjoyed tinkering with mechanical things ever since she was a little girl. She attended school to learn more about this hobby, and even tried to develop a new type of weapon in university. Ramsey has trouble focusing on the details, so the equipment she "repairs" tends to malfunction. To counteract this unfortunate tendency, Ramsey attempted to develop a weapon that would never need any kind of maintenance, but grew bored with the project and quit half way through. She got a job at a maintenance facility, but she again faced the problem of everything she worked on malfunctioning afterwards. As a result, Ramsey has resumed her research in hopes of developing a weapon that will not require any sort of maintenance. 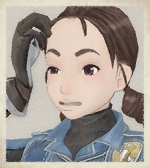 Ramsey's appearance in Valkyria Chronicles.
Add a photo to this gallery
Retrieved from "https://valkyria.fandom.com/wiki/Ramsey_Clement?oldid=72467"
Community content is available under CC-BY-SA unless otherwise noted.