The Imperial Medium Tanks were a new standard in Imperial tank design during the Second Europan War.

A vast improvement over the previous models of Imperial tanks, over 12,000 units were constructed during the course of EWII. This success can be attributed to the increase in both armor and firepower over the Imperial light tank.

While the design of the Imperial medium tanks sacrificed the mobility of the previous models, this was made up for with a solid balance between armor, firepower, and speed. The medium tank was also easy to adapt and modify, leading to the production of numerous variants across the battlefield and earning it the nickname "Fatherland" by the Imperial soldiers who served alongside it.

This newer model of Medium Tank was assigned to Calamity Raven. Borgia's financial support allowed for an upgrade to the engine that provided greater horsepower.

Note: Tanks equipped with the flamethrower or heavy machine gun are equipped with a different Ur pMG (01/2/3 and the k1, respectively), but they share the same stats as the ones listed above.

(there is only 1 version of this tank) 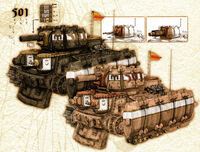 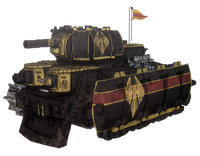 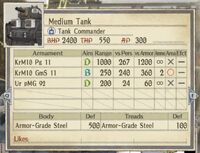 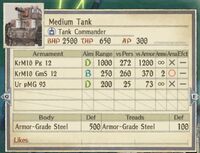 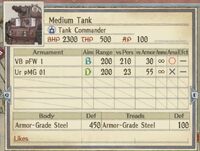 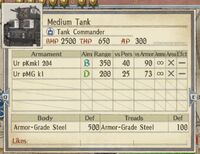 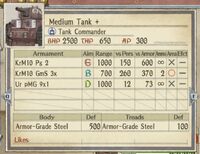 Imperial Guard + Flamethrower turret
Add a photo to this gallery

Retrieved from "https://valkyria.fandom.com/wiki/Medium_Imperial_Tank?oldid=78169"
Community content is available under CC-BY-SA unless otherwise noted.