Mounts von Borg is the current head of the Borg household, a noble family with a long history and strong bonds with the royal family. In the days when Gallia was under Imperial rule, the Borg family enjoyed a life of luxury and prosperity due to their ties with the Emperor. After Gallia won their independence, however, the Borg household's power and wealth gradually dwindled. Waiting patiently for the day when the Borg family might reclaim their former glory, Maurits von Borg clung to what little authority he had left.

Opportunity came knocking on Borg's door in the form of an epidemic that claimed the lives of Princess Cordelia's parents. Borg had secretly been leading a rebellious group of nobles who hoped to eventually dethrone the Duke, so Borg took this opportunity to speak out against Cordelia's claim to the throne. Borg proclaimed a that Cordelia was far too young and inexperienced in politics, and with the support of the noble families, was appointed as Prime Minister until Cordelia reached the age of maturity. Borg was planning on using his new position of authority to shape the very future of Gallia, and though his ambitions were strictly self-serving, he knew how to present himself well and was able to win over the majority of the citizens of Randgriz.

When Gallia was attacked by the Empire, Borg immediately attempted to form an alliance with the Federation, but realized he was betrayed when the Federation revealed their own sinister plot. With few options left, Borg turned to the Empire, hoping that the Borg household could at least reclaim its former glory, and that he might even be granted the throne of Gallia if he assisted the Empire in its conquest. For Borg, the Empire's declaration of war against Gallia was the perfect opportunity to find a way to hand Gallia over to Imperial rule. Borg knew that he would never sit on the throne without the support of the public, and that simply handing the country over to the Empire would surely cause civil unrest. He therefore contacted Maximilian in secret to devise a plan that would allow for himself and the Empire to both get what they wanted, without alienating the citizens of Gallia.

Marmota's penetration of Randgriz Castle had been orchestrated by Borg and Maximilian, so Borg assumed that everything was progressing according to their plan when the behemoth tore through the castle walls. To say that Borg was shocked when Maximilian ordered his execution would be more than a mild understatement. Without much ado, Borg's treacherous life was ended at the hands of the Imperial troops.

Borg overflows with self-confidence, and will never lend an ear to anyone's opinions as he believes that he is always right. His own comfort and political power are the driving forces behind all of Borg's decisions, and he is not even remotely concerned about the welfare of others. Being quite the narcissist, Borg lends to become intoxicated with his own passion whenever he delivers a speech regarding his idealistic plans for Gallia's future. To feed his own insatiable lust for power, Borg was willing to set his homeland to the Empire, and he would not hesitate to cut down any who might stand in his way.

He also has a rather high opinion of himself, and even when speaking to Prince Maximilian, Borg addressed him as an equal. In fact, in Borg's mind, his cooperation with Maximilian was simply on unfortunate necessity in his grand scheme to make his household the official house of royalty in Gallia, and he fully intended to manipulate Maximilian as nothing more than a pawn. 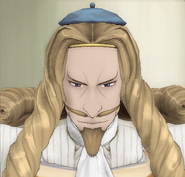 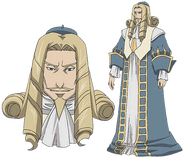 Borg's appearance in the Valkyria Chronicles anime.
Add a photo to this gallery
Retrieved from "https://valkyria.fandom.com/wiki/Maurits_von_Borg?oldid=78057"
Community content is available under CC-BY-SA unless otherwise noted.