"It's not like running will cause the baby to fall right out. This is my fifth, so I think it's safe to say I know what I'm talking about."
—Martha Lipponen, Valkyria Chronicles

Martha Lipponen (マーサ・リッポネン, Māsa Ripponen?) is the thirty-eight year old nanny to the Gunther family who has helped raise Welkin and Isara since birth, as well as five of her own children.

A presence in the Gunther house since she herself was a child, Martha became a surrogate parent and source of assurance to the orphaned Welkin and Isara. After evacuating Bruhl, she moved to the capital with her family. Concern for Welkin and Isara eventually drove her to take up work at the militia mess hall.

She gave birth to her fifth son inside the Edelweiss on the day Bruhl fell to the Empire.

As the eldest of three sisters, Martha grew up as part of a happy family. Her maternal instinct is naturally powerful, so she enjoys caring for others. With a strong and positive personality, Martha is always seen with a smile on her face. As a child, Martha was quite the tomboy, and was often seen chasing wild goats or climbing to the top of the windmill in town. Her hobbies include sewing, and she greatly enjoys seeing an article of clothing take shape from colorful fabrics and thread.

During EWI, Martha's mother was hired by the Gunther household as a servant, and Martha often assisted her mother by caring for Welkin. She readily admits that even as a child, she had planned to work for the Gunther household when she grew up. Around the time when Isara was adopted into the Gunther family, Martha took over her mother's duties at the Gunther home. Martha always treated Welkin and Isara as her own siblings, and continued to coddle them even after they grew up. After Martha got married, she was blessed with four children of her own, and she moved into a house closer to the Gunther estate with her family and parents.

When EWII threatened their peaceful lives, Martha asked her husband to head to Randgriz with their four children, as she intended to fulfill her duties by staying in Bruhl until Welkin and Isara had finished preparing for the evacuation. Though Martha was carrying her fifth child in her womb, she did not allow that to slow her down when it came to doing her job. When Imperial troops broke into their home, the shock sent Martha into labor. As Welkin and Isara attempted to get her to safety, Martha gave birth to a son inside Edelweiss. The fortitude of this mother and child offered much encouragement to Welkin and the others.

After the battle at Bruhl, Martha made it safely to Randgriz with Welkin, Isara, and Alicia, where she was reunited with her husband and children. When Welkin and the others were drafted into the militia, Martha accepted a job at the mess hall in the Gallian military base a cook, hoping to be of some assistance to her dear friends. Her nutritionally balance meals were quite popular among the soldiers, who claimed that Martha's warm meals reminded them of home. 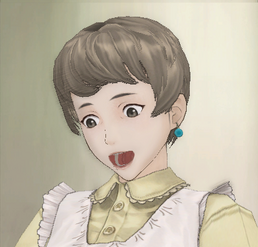 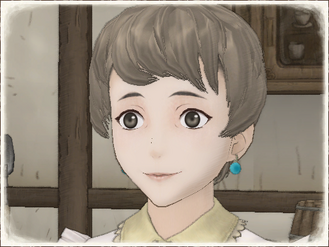 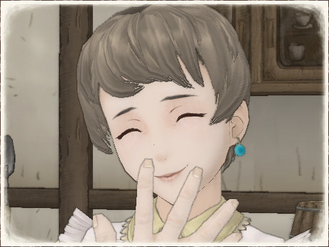 Add a photo to this gallery
Retrieved from "https://valkyria.fandom.com/wiki/Martha_Lipponen?oldid=50725"
Community content is available under CC-BY-SA unless otherwise noted.