"So this is a fabled "airplane"? That's awesome! I can't wait to take it for a spin!"
—Leon Schmidt, Valkyria Chronicles

Leon Schmidt (リオン・シュミット, Rion Shumitto?) is a twenty year old Private First Class and a member of the militia's R&D team. His chief task lay in the development of new weapons.

Despite entering a secondary tech school with promising grades, his freewheeling nature soon prompted him to withdraw and wander Gallia until the war broke out. His insistence on testing everything he developed resulted in quality work and one instance of him accidentally driving a tank full-bore into a civilian home.

Entrusted with outfitting the Shamrock, Leon soon converted Zaka's tank into a reflection of his own personality: quick and flighty as a bird. Through his work on various vehicles, he gradually became interested in driving, and often tried his hand at the wheel of anything he could find in the hangar.

A speed demon since the day he piloted Isara's airplane, Leon subsequently became a racer by trade. He hasn't slowed once after taking the gold at his first event, and he continues to race in competitions across Europa. 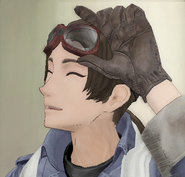 Retrieved from "https://valkyria.fandom.com/wiki/Leon_Schmidt?oldid=71098"
Community content is available under CC-BY-SA unless otherwise noted.