Lanseal Royal Military Academy is the only military academy in Gallia. The purpose of the academy is to prepare new officer cadets for service in the Gallian military. It is also very large, housing several facilities such as the R&D Building, the Drill Grounds, and also a swimming pool. It is the equivalent of Headquarters in the original Valkyria Chronicles.

Standing tall for 217 years, the Lanseal Royal Military Academy is also Gallia’s only military academy. Records of the academy’s location show that it was not in fact built from scratch, but rather constructed around an existing old citadel, and then adding new expansions like the training grounds and the residential buildings.

The academy uses a credit system, and on average, cadets can get through the program in approximately three years. There are two ways in: either get recruited by one of Lanseal’s scouts, who visit schools across the country looking for gifted students, or apply directly. Everyone has to pass both a written and field test, but the bar is much stricter for those applicants who are non-scouted.

Because graduates are immediately promoted to officers in the army, the thought of having a Lanseal diploma is actually quite tempting for many who want to serve their country further. This also means that the age of cadets varies widely, with some in their late teens, others in their twenties, and some in their thirties.

The student body is divided into seven classes, naming from Class A to Class G. During combat, each class functions like a military squad with the class chair as the leader, giving direct orders. The class chair, however, does not have the power to make important decisions but must request permission from their supervisor who is a Lanseal staff and an Army officer. Each class is given command of one tank and has full access to Lanseal's arsenal.

The briefing room is where the next mission is selected. This is also where you can adjust your squad, assign leaders and modify equipment, potentials and vehicle configuration. The briefing room is inside the brown-colored building, south of the main building.

The drill ground is the westernmost-part of the Academy. It has two functions: one is to train unit classes using experience points and the other one is to upgrade unit classes. Training a class to a certain level will yield Orders or titles to rename your squad.

The R&D Building is to the north of the Academy. Weapons, armors, and tank parts can be developed and upgraded here. The tank can also be repaired here if destroyed in the previous mission. There are options to change equipment or modify vehicle configuration as well.

The store is located to the East of the main building and is owned by Welvar Glenn. Welvar sells various types of newspaper and gives extra missions of unknown source. Alicia also sells her bread here. Sometimes, Welkin drops by and teaches certain Orders to the students of Lanseal. 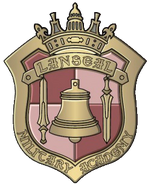 Lanseal Forces Insignia
Add a photo to this gallery
Retrieved from "https://valkyria.fandom.com/wiki/Lanseal_Military_Academy?oldid=40700"
Community content is available under CC-BY-SA unless otherwise noted.