"The best stories are always in the most dangerous places! I'm the bravest reporter GBS has!"
—Irene Ellet, Valkyria Chronicles

Irene Ellet (イレーヌ・エレット, Irēnu Eretto?) is a determined news correspondent of GBS radio station who appears in Valkyria Chronicles and is also its narrator. She has her own newspaper, "The Writing on the Wall", while she covers Squad 7 during the Second Europan War (EWII). As the story progresses, she also gives Welkin reports, but for a fee, as she claims that "I'll be paying for everything out of my own pocket".

She is capable of accurately reporting events without any bias or prejudice. In a time when most nations are implementing press restraints, she will be following Welkin and the men and women of Squad 7 to deliver what is actually happening in the battlefront.

Not long since the end of EWII, she married and took the surname Koller, under which she published her book, "On the Gallian Front".

"Have you heard of Irene Ellet, chief? She's a radio journalist and the person I respect most in the world."
—Lotte Netzel, Valkyria Chronicles 2

In Valkyria Chronicles 2, Irene is mentioned and fervently idolized by Lotte Netzel, a scout from Class G. She is described by Lotte as the kind of reporter she wants to become, due to her efforts in maintaining the distribution of the truth regarding the war via her "Writing on Wall," despite the government's efforts to censor any of their short-comings through other media sources.

Born in southern Gallia, Ellet survived a childhood full of the chaos that was EWI. She lost parents early on, and was raised by her grandfather along with her older brother. For Ellet, her brother was her greatest emotional support. After the war, Ellet's grandfather passed away from illness, and her brother joined a charity organization that traveled across the war-torn continent on a humanitarian mission. It saddened Ellet to be all alone but she was determined to support her brother's decision 100%. The two siblings wrote to each other every month, but eventually, the letters stopped coming. No matter how many times Ellet asked the charity organization about her brother's status, they refused to give her any information until one day she received a rather simple notice stating that he had died in a battle. They did not offer Ellet any further details, and she had no choice but to suffer the heartache of not knowing what had really become of her brother. This was the incident that convinced Ellet to become a reporter, so that she might be the one to convey important information to people.

After graduating from university, Ellet got a job at a publishing company, and immediately went out with her grandfather's old camera to perform interviews. Ellet had the courage to broach any subject with anyone, and does not make any distinction based on social standing or race (including Darcsens). Her straightforward nature did get her into trouble a few times, but she always got her story, and everyone had to admit that she was a force to be reckoned with.

When EWII began, Ellet traveled all over to gather information regarding the Federation, the Empire, and the war in general. She hoped to deliver news of the war to the people waiting at home so that no one had to suffer the pain of not knowing the way she had. Ellet also had ulterior motives, which were to expose the secrets she suspected the military of keeping regarding the connection between the Darcsens and the Valkyrur. Part of her motivation came in the form of a desire for vengeance for what had happened to her brother. Since she had lived most of her life alone, Ellet had a hard time opening up to people and depending on others, so she desperately hoped to find someone with whom she could finally share her innermost feelings with.

When she heard that the Empire had declared war on Gallia, she returned home and focused her interviews on the Gallian war effort, as a reporter for GBS (Gallian Broadcasting Station). She was one of the first reporters to volunteer as a war correspondent, and she was given an assignment to cover Squad 7. Ellet did not hesitate to publish the truth in its entirety, and though the national censorship board did attempt to stop her from publishing what they considered "sensitive" information, this only fueled the fire of Ellet's passion for the truth. As she got to know the members of Squad 7 and saw the war through their eyes, Ellet got the idea of recording all of that information in a little handbook. Eventually, Ellet was able to let go of her anger over her brother's mysterious disappearance, and learned to report the news professional and objectively.

Her first appearance in the Valkyria Chronicles Anime is in Episode 6:"War Correspondent, At Her Best!". She appears at the 3rd Regiment, Gallian Milita base, as a reporter for the GBS radio and attempts to interview Welkin Gunther and squad 7 as rising stars. She faces complications when Welkin's aide, Alicia Melchiott attempts to hide his true personality. Unable to gain any productive information through squad 7's other members, she resorts to ambushing Welkin in the male lavatory and attempts to seduce him to no avail. In the end, he agrees to a proper interview if she would do him a favor and provide his squad with quality meat. She talks positively about squad 7 on air, and regards Welkin as a mysterious person and announces that she will be looking forward to interviewing him again.

Irene appears again in Episode 11:"Uninvited Guests" & Episode 12:"The Abducted Princess". During the ceremony in the Randgriz Castle, she appears as a representative of the GBS and interviews the various celebrities that turn up for the ceremony. She bumps into Welkin, Faldio, Ramal, Isara and Alicia and starts to converse, then leave to interview more people, after warning them that her instinct told her 'something' was going to happen. She later spies the disguised General Jaeger & Selvaria and finds them suspicious. After reencountering Welkin and co, who were in a hurry to chase the princess' kidnappers, she asked Welkin if something was wrong, in which he replied "no". She leaves them and later eavesdrops on Borg and a Federation ambassador, discussing their conspiracy. She decides to retain the information from the media, as Princess Cordelia has chosen to keep the incident private.

Irene reenters the anime in the Special Episode 29:"Shock! Prized Photos!", where she offers 'special photos' of squad 7 to its members. 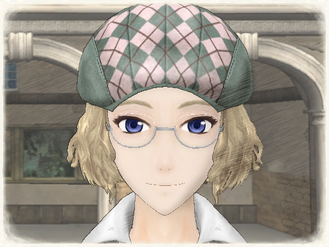 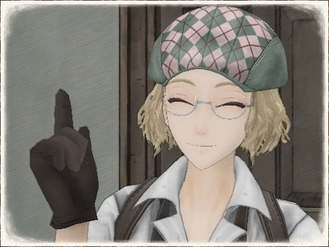 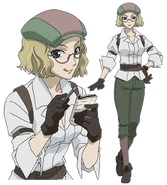 Add a photo to this gallery
Retrieved from "https://valkyria.fandom.com/wiki/Irene_Ellet?oldid=70992"
Community content is available under CC-BY-SA unless otherwise noted.