The tank destroyer had a fixed superstructure in place of a rotating turret. While this hindered its ability to engage faster moving targets, the increased support allowed for a larger, more powerful main gun.

Originally developed as a self-propelled artillery unit, the addition of a drive system similar to that used in Imperial Heavy tanks saw it reborn as a tank destroyer. Equipped with an anti-tank cannon based on anti-aircraft weaponry designs with exceptional amour-piercing capabilities, it became the bane of the Federation. This highly useful design soon took the field not just within armored squadrons, but as an escort unit for foot soldiers.

Interception fire field is 90 degrees to the front. 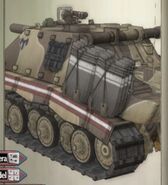 Standard camo 2
Add a photo to this gallery
Retrieved from "https://valkyria.fandom.com/wiki/Imperial_Tank_Destroyer?oldid=78199"
Community content is available under CC-BY-SA unless otherwise noted.