This article is within the scope of VC3 Character Pages project.
You may be awarded a "The Wings of Solidarity" medal for contributing.

"The death of one specific individual... I wish for nothing beyond that."
—Imca, Valkyria Chronicles 3

Imca (イムカ, Imuka?), also known as "Ace" or "Number 1," is a Darcsen heavy weapon specialist whose village was destroyed by the Valkyria and she is seeking revenge. No matter what the situation she always uses her prized weapon, Var, which can be outfitted to suit all infantry classes.

Imca has dark-blue eyes and long dark-blue hair tied into a ponytail. Her hair is tied with a Darcsen ribbon. She differentiates her appearance by wearing armor over the Nameless black turtleneck shirt with her numbers emblazoned on the collar. She also wears a black belt. Her armor is a dark-blue color with facets of red on the armor torso's side. She also wears dark-blue pauldrons. Her left gauntlet matches the dark-blue sheen of her armor and her right gauntlet is black, akin to the Nameless color scheme. She wears black gloves. She wears the standard Nameless pants and combat boots.

In her beach outfit, she wears a two-piece swimsuit and retains the Darcsen ribbon tying her hair into a pony tail. The two piece consists of a red sports top and a black monokini. In concept artwork, it shows that she could have worn black bloomers.

In her ending outfit, she ties her long dark-blue hair into a ponytail, tied with her Darcsen ribbon. She wears a long blue dress with a large white collar. The dress has white frills for its wrists. She also wears a bluish apron with frilled pockets on each side. She wears black leggings and brown shoes. In the concept artwork for her ending outfit, she wears a darker blue dress, a pink apron embroidered with a rubber duck on the left chest. The frills on her dress are more defined.

In Riela's ending, her dark-blue hair is tied into a ponytail featuring her Darcsen ribbon. She wears a black tuxedo.

The concept artwork for Imca shows that she should have had shorter hair with a tail standing upwards. It also shows her without her armor and wearing a more form-fitting shirt. Other concept artwork shows her Darcsen ribbon actually being a Darcsen bandanna and showing as tied through the front of her head. 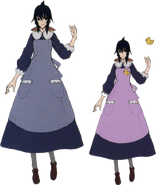 Imca at first, is aloof, withdrawn yet focused. She maintains a calm demeanor and a straight-man like attitude towards Kurt. This is due in part to the tragedy of her past, being the only survivor of such a calamity. She is eager to engage in battle and is very vengeful against Valkyria, in particularly, the Valkyria who decimated her village with blue flames. She was often insubordinate of her previous commanders, choosing to forgo their decisions and emphasizing her own choices in battle. With vengeance as her source of strength, she killed many without hesitation.

As she spent more time with Nameless with Kurt at its helm, she gradually threw away her cold exterior and became more agreeable with her interactions. She even grew to become close with Riela and Kurt in particular. Shortly after Riela reveals herself as Valkyria, Imca releases an immense rage towards her friend, hinting at the severe trauma from her past which continues to burden her actions in the present.

Only after hearing Selvaria has passed does Imca think about the consequences of her actions, revealing her sense of regret in doing what she did out of vengeance. It was then that she decided to found an orphanage, living as the kind and loving woman she had become throughout her ordeal.

Expanded Biography (VC3)
"A star soldier who lives only for vengeance, pursuing the devil who stole her hometown from her."
—VC3 COMPLETE ARTWORKS

At the dawn of Kurt Irving's command over the Nameless, Imca persisted in her solitary ways, often acting independently and moving to positions far from support with only her great strength and skill ensuring her survival. Slowly but surely she began to put more trust in Kurt's planning, being one of the last members of the 422nd to call him by name rather than "7." Imca's childhood experience within the Empire proved of vital importance when the squad was ordered to cross the border and attack a small enemy base near where Tiluca had once stood. After the 422nd encounters Militia Squad 7 during joint action against Calamity Raven, Imca strikes up a conversation with Isara Gunther, the two young Darcsen women sharing their thoughts and expertise. It was thanks to Isara's advice that Imca was able to modify Var to its strongest version, enabling its signature multi-lock feature. Later, when the two squads reunited during the battle at Naggiar, Imca reads into Welkin's silence and deflection about Isara that the worst has happened, and personally gives her a three-volley salute with Var. However, despite her personal preparation Imca was not ready to encounter a true Valkyria, freezing in fear after a display of power from Selvaria Bles at the fortress of Ghirlandaio.

With emotional support from Kurt, Imca began to regain her confidence, but her long-nursed anger and sadness became misdirected when Riela Marcellis first used her Valkyria powers to save the squad from Gallian pursuit. The sight of transformed Riela caused Imca to fly into a rage, and she would have surely killed Riela if not for intervention from Kurt. Her last attempt at fulfilling her vow for revenge saw her infiltrate Ghirlandaio Fortress alone in search of Selvaria. Darcsen and Valkyria fought on even terms for a time, with Selvaria impressed that Imca could keep up with her, but when Selvaria began to unleash her full power the match turned decidedly in her favor. Selvaria let Imca leave with her life, and the timely arrival of the 422nd ensured she was not overwhelmed by Imperial troops. Soon after, though, Selvaria's taking of her own life through the Final Flame cost Imca her object of revenge, seemingly invalidating her purpose in life. Kurt, however, was there again to support her, and the pair's relationship turned into a full-fledged romance (provided the player chooses for Kurt to interact with her instead of Riela) that continued through the 422nd's remaining efforts against Calamity Raven and its disbandment. After the conclusion of the war between Gallia and the Empire, Imca takes a new path in life, raising orphaned children alongside Kurt.

Imca has appeared as a character in the following spin-off titles:

Imca has appeared as a guest character in the following titles:

For information regarding Imca's quotes, please refer to: