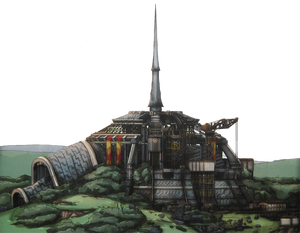 The Hammer of the Valkyrur is an ancient building complex constructed by the Valkyrur. Located within the borders of the Empire, this abandoned relic came to new prominence in the modern era just after the end of the Invasion of Gallia.

From the exterior, the Hammer of the Valkyrur resembles other local ruins. Most notably, the entryways possess the same shell-like arch seen in the temple located in the Barious Desert. From within these archways paths lead to a central dome, in the middle of which is a lance-like spire. By 1935, a sizable portion of the dome structure had crumbled due to age and encroaching plant life. More recent additions to the structure include a fair amount of scaffolding, elevators, and other heavy equipment incorporated into the side of the dome structure.

While none can be sure if the building was used for other purposes by its creators, the feature that gives the Hammer of the Valkyrur its name is the central spire that can be used as a ballistic weapon. It is unknown if the Hammer was ever used in anger by the original Valkyrur, but their superhuman powers were necessary to launch the missile-like spire toward its target. The resulting explosion from an attack would be large enough to level a city to the ground. Additional spires were located in an armory underground, below the main structure, suggesting that the Valkyrur were prepared to use the Hammer for more than intimidation. A secondary use for the spire was made possible by running power through it, causing bursts of ragnite energy to arc off the spire's body and pepper a wide area, and made for an effective anti-personnel weapon.

After its discovery, the Hammer came under the authority of Gennaro Borgia, a prominent cardinal in the Yggdist faith. While investigating the ruins, Borgia became aware of their potential as a super weapon, and kept their existence a closely-guarded secret. Utilizing a small-but-loyal work force that camped at the Hammer's base, Borgia oversaw the modernization of the facility, especially its main weapon, using the latest in technology. Eventually they were able to realize the weapon's potential, incorporating rocketry and sophisticated trajectory equipment into the Hammer.

Borgia would not live to see the Hammer in action, however, as his subordinate Dahau and his special forces group Calamity Raven betrayed him after the Darcsen leader learned of its existence. Making the complex their own fortified citadel, Calamity Raven was nevertheless on its last legs, and Dahau planned to use the Hammer as his trump card in order to create an independent Darcsen nation. His show of force would have meant the obliteration of Randgriz, but the combined efforts of Squad 422 stopped its spire in mid-launch. As the missle crashed back down into the Hammer's main structure it destroyed all the main launch components, both old and new, preventing the ruin from being used by anyone again.

Retrieved from "https://valkyria.fandom.com/wiki/Hammer_of_the_Valkyrur?oldid=36210"
Community content is available under CC-BY-SA unless otherwise noted.