Attention, cadets!
The following article contains significant spoilers and/or ending details of
Valkyria Chronicles 2. If you don't want to get shot, tread carefully!

The Gallian Civil War was an internal conflict that took place in the Principality of Gallia between loyalist forces and the Gallian Revolutionary Army during the Second Europan War.

It began in October 1936 and ended on December 21, 1937, lasting for a year and three months. The events of Valkyria Chronicles 2 took place during the war. 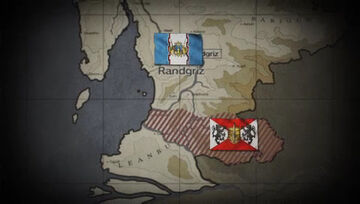 The conflict's roots can be traced back to the end of the Invasion of Gallia when Princess Cordelia revealed her family's Darcsen heritage. While most of Gallia's citizens accepted Cordelia's revelation, conservative elements of Gallian society including many of the nobility rejected House Randgriz's authority due to continuing anti-Darcsen prejudice.

Exploiting this prejudice, Count Gilbert Gassenarl founded the Gallian Revolutionary Army in an attempt to overthrow House Randgriz and seize control of Gallia for House Gassenarl. Based at Castle Gassenarl in southern Gallia, the GRA adopted an ethnic cleansing agenda, seeking to expel or kill all Darcsens in Gallia. In addition to the support provided by several other Gallian noble families, Gilbert had established ties with the Federation through Ambassador Jean Townshend and was granted access to Federation weapons and technology. The GRA's ranks were swelled by malcontents that sought to blame House Randgriz and Darcsens in general for the suffering Gallia endured during the last Imperial invasion.

As the Gallian military had been severely reduced during its war with the Empire, loyalist forces were unable to quickly suppress the rebellion. In addition, the Gallian constitution forbade the deployment of militia against internal rebellions, further reducing the forces available to counter the GRA. Ultimately the loyalists were forced to rely on trainees and cadets to help supplement the regular forces.

The GRA focused much of its efforts in southern Gallia during the opening phases of the civil war. It launched a series of raids against loyalist towns in the Arlem Region, seeking to cleanse the area of Darcsens. These early efforts were constantly opposed by forces composed of cadets undergoing officer training at the Lanseal Military Academy. Cadets led by Avan Hardins were able to thwart many of the Darcsen purges attempted by GRA forces, but civilian casualties continued to mount.

Another especially daring raid was conducted by rebel forces under the command of Dirk Gassenarl and Baldren Gassenarl in the Leanbluff Forest. Using Artificial Valkyria, the rebels ambushed a convoy escorting Princess Cordelia on an inspection tour of southern Gallia. Demonstrating the power of their V2 Artificial Valkyria, the rebels destroyed a tank accompanying the convoy with their opening shots. Lanseal forces escorting the convoy succeeded in buying some time, but were slowly being overrun before a mysterious Valkyria named Aliasse intervened. The V2 proved unable to match the power of a true Valkyria and the rebels were forced to withdraw. 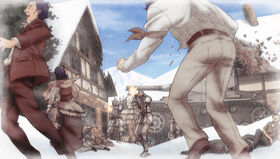 Despite their setbacks, rebel activity intensified and Baldren returned to the field, leading a force intent on purging villages in the Diebal Mountains of Darcsens. Though Lanseal forces were once again successful in forcing Baldren to retreat, the damage had already been done and many Darcsen civilians perished.

As the war continued, rebel forces continued their advance north towards the capital city of Randgriz. In order to encircle the capital, the rebels struck two other cities in central Gallia, Mellvere and Yuell. Led by Baldren Gassenarl at Mellvere and Audrey Gassenarl at Yuell, rebel forces were able to breach the defenses of both cities and were in the process of overrunning the remaining loyalists when a Lanseal force intervened at Yuell. Despite being outside their jurisdiction, the Lanseal cadets were able to penetrate rebel lines and seized the main rebel base outside of Yuell. With her forces in disarray and army reinforcements approaching, Audrey was forced to withdraw from Yuell.

While Mellvere fell to Baldren, Audrey's defeat meant the rebels had failed to encircle Randgriz and were now dangerously spread thin. The rebels eventually withdrew from Mellvere as well, but were far from defeated.

On the day of the Feast of All Spirits 1937, GRA forces using the airship Perkunas launched a massive attack against the Lanseal Military Academy. Employing a large number of V2 Artificial Valkyria, the rebels decimated Lanseal's defenses and killed many staff and students. With little choice left, Juliana Everhart, chair of Class A, underwent the procedure to become an Artificial Valkyria and engaged the V2s. Though she was able to destroy several of the rebel V2s, she was mortally wounded after engaging Dirk Gassenarl. The rebels withdrew shortly after, having achieved their objective.

Despite the destruction wrought by the rebels, it quickly became apparent the rebels were not seeking to occupy the academy. Having tracked Aliasse, the Valkyria that had bested them months before in the Leanbluff Forest, the rebels were hoping to capture her and any research being conducted at Lanseal. While Aliasse was nowhere to be found, the rebels seized all of the research documents related to Artificial Valkyria at the academy and escaped. 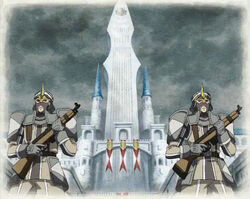 The attack on Lanseal destroyed the academy's ability to stage military operations in the south. Without Lanseal's cadets to counter rebel movement, the GRA was able to launch a new offensive against Randgriz unopposed. On the 31st of August, Randgriz fell to the GRA and the Archduchess Cordelia was taken prisoner. With Randgriz under GRA control, Gilbert Gassenarl declared himself the new archduke of Gallia.

Gilbert's reign was short lived however as he angered his son with his plans to join the Federation. Disgusted with what he perceived as his father's betrayal of Gallia, Baldren shot his father and assumed the throne. Baldren covered up his patricide by blaming a loyalist assassin, though both his sister and Ambassador Townsend knew the truth. By intimidating Townsend, Baldren was assured of continued Federation support even as he refused to join it. Audrey, while shocked at her brother's actions, remained at his side for the sake of Gallia.

Even with the fall of Randgriz, House Gassenarl's position remained tenuous. Substantial loyalist forces remained centered around Fouzen and Ghirlandaio and were likely to attempt a counteroffensive. To prevent this, on the 28th of September the GRA began dispatching troops northward to secure the other regions. Despite their gains, the rebels remained outnumbered by the loyalist army and relied heavily upon their Artificial Valkyria Corps to even the odds. Unfortunately, the V2 Artificial Valkyria required a large supply of ragnite to power their systems. Although the Federation was providing significant amounts of ragnite to the GRA, the only major port in rebel hands was in the south. With rebel supply lines so widely extended, the rebels were soon facing difficulties maintaining their forces.

Even as the rebels faced heavy resistance in the north, Darcsen mining towns in the Doerfein Mountains were rising up against the GRA. Incensed by this, Baldren personally led a force to put down the uprising and make an example of the Darcsens by burying them alive in the tunnels. However, once again Lanseal forces responded and forced Baldren to retreat. In addition, Cadet Cosette Coalhearth was able to disarm the ragnite bombs set to collapse the mine tunnels, thus saving not only the Darcsen workers but her fellow Lanseal students.

With the setbacks suffered by the rebels to the south, the Gallian Army was able to turn the tide in the north and launch a counteroffensive. On the 7th of November, 1937, the Gallian Army began Operation: Alabaster Gale, driving rebel forces back and marching south to liberate Randgriz. With their supply lines cut, the GRA found itself unable to withstand the loyalists and began a retreat to southern Gallia. On the 10th of November, 1937, the Gallian Army entered Randgriz and liberated the city, reclaiming the capital after just 70 days under rebel control. With Cordelia freed, the rightful archduchess was returned to the throne.

The rebel's military capacity had been effectively exhausted after their long battle with the regular army in northern and central Gallia. The remaining GRA forces retreated to the port city of Anthold, their last major stronghold. There, Baldren sought to escape to Federation territory using the battleship Dandarius. However, Lanseal forces pursuing the rebels discovered the presence of the warship and sent a warning to Randgriz. While they waited for the regular forces to arrive, the cadets led once more by Avan Hardins sought to delay Baldren's departure for as long as possible.

By attacking Audrey Gassenarl head on, the cadets were able to distract the rebels long enough for Cadet Zeri to plant charges on the Anthold aqueduct. The aqueduct's destruction flooded rebel positions and killed Audrey as her personal tank was caught in the torrents. With this success, the Lanseal forces were able to reach the harbor. There, they faced off against the remaining V2 under the command of Dirk Gassenarl. With the help of Aliasse, Dirk was slain and the cadets boarded the Dandarius. 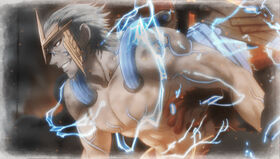 Despite heavy resistance from the remaining rebels, the Lanseal cadets were able to do destroy the Dandarius' main gun and even defeat Baldren Gassenarl despite his transformation into an Artificial Valkyria. With the arrival of the Gallian navy commanded by Archduchess Cordelia herself, the Dandarius was sunk and the last of the rebel leadership perished with her.

After the victory at Anthold, Princess Cordelia called for the surrender of the remaining rebel forces still fighting in Gallia. The human experimentation that occurred at Lanseal was revealed to the public though the principles behind the project were either dead or had disappeared. Lanseal was closed for reconstruction, after hosting one final graduation ceremony for the surviving cadets.

Prejudice against Darcsens remained a problem in Gallia, but the Archduchess Cordelia has pressed forward with her reforms in hopes of changing her country for the better.

Retrieved from "https://valkyria.fandom.com/wiki/Gallian_Civil_War?oldid=68317"
Community content is available under CC-BY-SA unless otherwise noted.