Attention, cadets!
The following article contains significant spoilers and/or ending details of
Valkyria Chronicles 2. If you don't want to get shot, tread carefully!

Edy Nelson (イーディ・ネルソン, Īdi Neruson?) is a seventeen year old Squad 7 shocktrooper. She is a popular character in Japan and the east for her pig-tails and tsundere personality, so much so that she received her own downloadable content called Edy’s Mission: Enter the Edy Detachment.

Her younger sister, Anisette Nelson, also appears as a shocktrooper from Class G in Valkyria Chronicles 2.

This section is empty. You can help by adding to it.

This section is empty. You can help by adding to it.

As a self-proclaimed actress growing up in a tiny rural town, she was quite the starlet. Though proud, she lacks coping skills.

Unable to forgive anyone who draws the public's eye away from her, she feels a strong (and one sided) sense of rivalry against Rosie, the squad's top trooper.

Upon hearing of Rosie's success singing, she tried to become an even bigger star, only to find she was tone-deaf. She is now training to become a real actress.

She proved to be one of the most popular characters in the game so the development staff turned her and Homer into the official spokesmen for the Valkyria Chronicles franchise on the "Front Line Journal" blog.

She is also the star of "Edy’s Mission: Enter the Edy Detachment" where she, Homer Peron, Susie Evans, Lynn, Jann Walker and Marina Wulfstan defend a small village from a large group of Imperial invaders.

Edy later went on to star in another set of DLC missions titled Challenges of the Edy Detachment.

"The self-proclaimed idol that belongs to Gallian Militia's Squad 7. Because of her pampered upbringing, she has grown to be a selfish person. She has a tendency to hate those who draw attention away from her, and she tries really hard to surpass them."
—Chain Chronicle Profile
"戦いにおいて捨て駒などというものは無い"
—Edy, Chain Chronicle

Edy makes an appearance in the Japanese version of Chain Chronicle as Squad 7's Self-Proclaimed Idol Edy (第7小隊の自称アイドルイーディ, Dai 7 Shōtai no Jishō Aidoru Īdi?), a SSR 4★ archer unit with the job class of Shocktrooper and she also uses the Rifle as her weapon.

Edy is voiced by Yui Kano and her artist is Raita Honjou. She is exclusively obtainable during the Valkyria Chronicles Collaboration Festival. 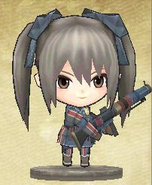 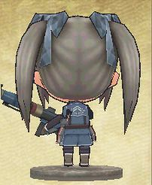 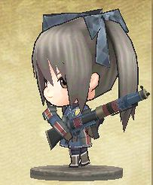 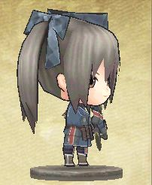 Retrieved from "https://valkyria.fandom.com/wiki/Edy_Nelson?oldid=78046"
Community content is available under CC-BY-SA unless otherwise noted.