This article is about the Archduchess of Gallia. For other uses, see Randgriz (disambiguation).

"I am destined to preserve the lands of Gallia, and the Valkyrian bloodline... nothing more."
—Cordelia Gi Randgriz, Valkyria Chronicles

Cordelia Gi Randgriz (コーデリア・ギ・ランドグリーズ, Kōderia gi Randogurīzu?) is the sixteen year old (18 in Valkyria Chronicles 2) current heiress to the Randgriz line of Archdukes who rule Gallia, standing as a figurehead of the nation and scion of the legendary Valkyrur.

The death of her parents, the former Archduke and Duchess of Gallia, left her heiress to the throne, though her young age has so far precluded her coronation. Since Maurits von Borg was appointed as her regent, she has concealed most of her feelings and thoughts to herself.

After the 1935 war, Cordelia of House of Randgriz, previously thought to be of Valkyrur lineage, announced she was a Darcsen. The hero Randgriz had hidden his ancestry after switching sides in the War of the Valkyrur and made the ruler of Gallia. This shocked the citizens of Gallia but the princess's sincere desire to rid Gallia of discrimination earned her strong support, and she was later made Archduchess. Many nobles and others who are anti-Darcsen are dissatisfied with this situation, leading to the birth of Gallian Revolutionary Army led by Gilbert Gassenarl and the Gallian Civil War in 1937.

Following the dispersal of the rebel forces by an unknown Valkyria, Cordelia walks out of the tank being escorted by Class G and reveals herself, unbeknownst to Class G that they were escorting the Archduchess of Gallia. She explains to Class G that her reason for being in the frontlines was to survey the extent of the damages committed by the rebel forces to some villages so as to assess what needed to be repaired. She had also brought a basket of Cinammon Rolls, a known favorite of hers to share with the villagers and graciously offered some to Class G. She then bids farewell to the young soldiers, who in turn, have been moved by her determination to help her people in any way she can.

In Incognito, Cordelia sneaks out of the castle with her personal guard, Holmes, to survey the citizens of Randgriz. While conducting her duty, she catches the scent of Cinammon Rolls, recalling how much she wants to try Alicia's rolls and how she also wants to bring some as a souvenir for a member of her Royal Guard, Elysse.

Cordelia makes an appearance in Samurai & Dragons as a UC monster card. As an UC monster card, Cordelia is of the Mercenary race and possesses the unique base skill, True Confession. 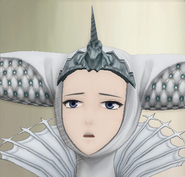 Cordelia as she appears in Valkyria Chronicles 2. 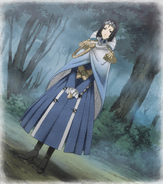 Cut-scene screenshot of Cordelia in Valkyria Chronicles 2.
Add a photo to this gallery

Retrieved from "https://valkyria.fandom.com/wiki/Cordelia_Gi_Randgriz?oldid=78073"
Community content is available under CC-BY-SA unless otherwise noted.