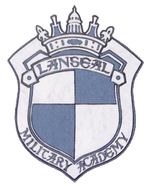 Class F or Squad F is one of the seven classes of the Lanseal Military Academy that took part in the Gallian Civil War. Before the attack on Anthold, Lanseal decided to bolster their forces by merging the much undermanned Class D, E, F with the remaining classes. However, the ill-fated cadets that joined Class B were all killed in the following battle.

Retrieved from "https://valkyria.fandom.com/wiki/Class_F?oldid=27381"
Community content is available under CC-BY-SA unless otherwise noted.