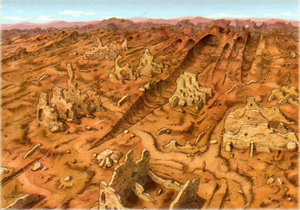 The Barious Desert is an arid desert devoid of all vegetation that covers the eastern Gallian basin area, several tens of kilometers across. The location is heavily featured in Chapter 6 "A Desert Encounter" and Chapter 7 "A Battle at Barious" and features not only sand and stone, but scattered ruins from a lost civilization.

Allegedly scorched as a result of the so-called Darcsen Calamity, the area has been reduced to a huge, uniquely-shaped crater with a host of deep crags issuing out of the massive gulch at the basin's center. Thought to be the result of a massive explosion, these fissures in the ground match standing rock formations full of large, circular holes. The true cause for the devastation of Barious is the use of the Valkof lance by the Valkyrur during the War of the Valkyrur, which completely obliterated the entire Darcsen community and forever changed the climate of Barious.

The remnants of human dwellings dot the eroded landscape, suggesting that this area was once the site of a large city. These days, violent sandstorms assail travelers, and visitors to the region are scarce.

The Barious Desert is featured in Chapter 6 and Chapter 7. Chapter 6 is a skirmish across a barren plain featuring tanks, snipers, anti-personnel and tank mines, and Malya the Dust who drops the ZM SG 1(g). Chapter 7 is a boss battle against the massive tank Batomys fielded by Maximilian as well as Selvaria Bles and a small squad of troops. It's a more difficult, timed encounter. Kanazar the Lion, hiding on the map, drops the ZM Kar 2(g). It later unlocks as the fourth re-playable skirmish.

Retrieved from "https://valkyria.fandom.com/wiki/Barious_Desert?oldid=55273"
Community content is available under CC-BY-SA unless otherwise noted.